"Have you been on a train? It's depressing. Nobody wants to spend their vacation staring at poor people's backyards." -- "Greg the Bunny"

Originally conceived as a (fairly) short train trip so Cathryn Humphris and I could see the San Francisco Giants play her beloved Atlanta Braves, I went a little further, making a loop around the western United States in...

Soon after the 2002 Major League Baseball schedule came out, Amtrak threatened to end its long-distance train service as of October 1st unless their budget was increased for fiscal year 2003. I felt there was some urgency involved, and so extended the L.A.-San Francisco trip, for myself, into an L.A.-San Francisco-Portland-Chicago-L.A. trip, with stopovers in San Francisco (actually Berkeley, using the nearest Amtrak station, in Emeryville) and Chicago.

On March 18, I made a brief trip south to Fullerton to test and see how well my new digital camera could take pictures of trains. The test was a success.

The plan was for Cathryn and I to save money by traveling in coach on the first leg of the trip, with me in a sleeping car room for the rest, but then a woman from the "Amtrak upgrade desk" called in late April and easily convinced me to upgrade to a sleeping car room for that first leg, at 50% off the normal cost of upgrading (a very good deal, especially for two people, since all dining car meals are included free).

And so the trip started on... 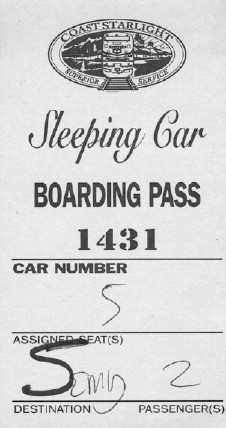 Anna Siri drove us to Union Station in downtown Los Angeles in plenty of time to make the 10:00 departure of the Coast Starlight. The conductors actually started handing out boarding passes in the station at about 9:15, and despite a little bit of confusion caused by Cathryn and I going up to the desk separately, we managed to eventually get a correct boarding pass. Boarding started at 9:25, and we walked out to the train and found Room 5 on the upper level of the "Ohio" sleeping car, one of three on the train (in between cars named "Texas" and "Wyoming").

Unlike most other Amtrak trains, the Coast Starlight has a special lounge car for first class passengers, called the Pacific Parlour Car. (That's right, there's a "U" in "Parlour," even though this is Amtrak, not British Rail or something.) From reading various trip reports, I knew there was a continental breakfast available there, but there was a difference of opinion on whether it started while the train was boarding, or not until the train departed.

We didn't go to the Parlour Car until after the train pulled out, and as it turned out, the continental breakfast had been going on all along, but there were still a few pastries and pieces of fruit available.

After we ate, we went back to the room as the train went through the San Fernando Valley and beyond. The dining car steward announced that lunch would start being served in the dining car at about 11:45 but to wait for an official opening announcement to come to the dining car; however, we never heard an official announcement, just an announcement that the car was full and that we sleeping car passengers should put our name on a waiting list that the Parlour Car attendant was keeping.

I went and did that, and we were called to the dining car at about 12:30, while we were making the long servicing stop at Santa Barbara. As of May 1st, in the latest in 31 years of money-saving ideas, Amtrak had switched to having exactly the same dining car menu (and food items) on every train, so I get my first look at the menu I'll be looking at, off and on, for two weeks. I have the steakburger, and Cat has the Southwest chicken salad, which actually looked better than my burger. The "free dining car meals to sleeping car passengers" policy includes dessert at lunch and dinner, so I opt for ice cream.

Room 5 is on the wrong side of the car to see the ocean, which the train runs alongside from Santa Barbara northward, so we sit in the Parlour Car instead after lunch. Cat ends up sleeping in one of the swiveling easy chairs while I look at the scenery, and end up seeing the most wildlife of any stretch of the trip (deer and coyotes).

At about 3:00, the Parlour Car attendant puts out crackers and cheese trays and conducts a wine tasting. We get to try three different California wines. After the wine tasting, the dining car steward comes around to take dinner reservations, with times starting as early as 5:00; since we're still stuffed from lunch, we opt for a late reservation time, at 7:40. 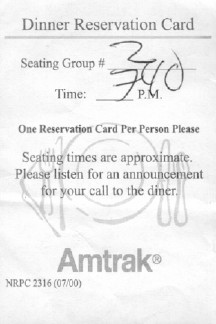 The Coast Starlight is notoriously late often enough that it's nicknamed the Coast Starlate, but we're running on time until after Paso Robles. However, we then proceed to spend time either running very slowly or stopping, and by the time we leave Salinas, it's 7:45 and we're officially an hour and 9 minutes late. We get called to dinner right after the stop, and we end up sitting with a couple who just got on in Salinas. Although the dining car steward, when reading the entrees over the train P.A. system before he took reservations, had claimed that tonight's "regional seafood selection" was red snapper, it turned out to actually be baked salmon.

Through the magic of schedule padding, we depart San Jose only 35 minutes late, but then we spend a long time sitting in the Oakland station and end up arriving in Emeryville at about 11:00, 50 minutes late. Cat meets up with her friend Kimber, and I meet up with my uncle John and aunt Elizabeth. We're both staying in Berkeley.

As it had turned out, the baseball schedule worked out so that not only could Cat and I see the Giants, we could also see the A's if we wanted. We did. 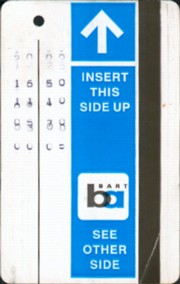 But first, John, Elizabeth, Elizabeth's daughter Masako, and I went out for Mother's Day breakfast. Afterward, I walked to the BART station and took the train to the Coliseum stop, arriving about half an hour before the game started.

Cat showed up in the second inning. It was a beautiful day, the crowd in the stadium was sparse, and we had good seats in the upper deck right behind home plate (the most inexpensive tickets of this trip, too). The A's struggled valiantly until the Blue Jays put the game away in the top of the 9th. Seagulls started hanging out in the upper deck towards the end of the game, a scene which ended up on the sports page of the San Francisco Chronicle the next day (see below).

Special baseball trivia note: As of this writing, the Blue Jays have two players with the same name as cartoonists, shortstop Dave Berg and catcher Tom Wilson.